Hello there, back again with another excellent guitar review for you! This time we will be looking at one of my recent favourite guitars, the Epiphone SG Custom Ebony guitar review!

I have been able to get back to having as many guitars as possible for all my needs, being very spoiled and grateful as well! 🙂 As many of you agree, there’s no such thing as too many guitars! Scale length, pickups, tonewoods…make a huge difference in how we feel while playing our guitars.

On top of that, if you also want to play your favourite songs by various bands and guitarists, you might always need another guitar to at least get close to the original tones and vibes of the songs.

I was really in need to have a guitar that features a 24.75-inch scale with passive dual humbuckers so I can use it with some of the rock, blues songs I wanted to play and also try drop tunings and started researching a new guitar.

I was even considering waiting for longer and saving a lot of money to purchase a high-end guitar such as Gibson, Eastman or equivalent segmented instrument. But I noticed it would bust the bank badly, so I gave up and looked for affordable instruments.

In my opinion, guitar players in this era are the luckiest people ever! There are so many affordable yet extremely well-built instruments.

Epiphone was always one of my favourite brands while I was working in the musical instruments industry. Even their most affordable guitars would sound and play great almost right out of the box.

Check out my Epiphone guitar reviews

With the extremely high level of competition in the musical instrument industry, guitar brands have been putting so much effort to improve the quality of entry and mid-segmented guitars. Recently, Epiphone has also put a lot of effort into making really cool guitars under their “Inspired by Gibson” series.

This means that the Epiphone company (owned by Gibson) releases Les Pauls and SGs that are almost exact replicas of the original legendary models with some step back features.

Epiphone SG Custom Ebony has been released to provide the opportunity for people who are really craving a Gibson SG Custom Ebony, but can’t afford it!

Of course, they belong to different segments, however, Epiphone has been successfully delivered the feel of it with its very cool look and outstanding traditional SG sounds. 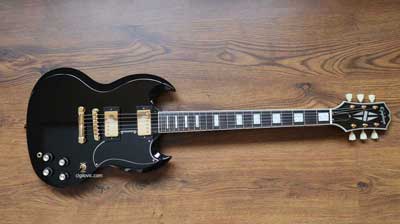 Before I will provide my review, I would also like to feature a great Youtube channel, Guitarista! Here, you can actually watch a really insightful in-depth review video of Epiphone SG Custom Ebony.

I have also prepared a review video in which I play random stuff and attempted to provide as many guitar tones as possible using my ENGL E570 tube preamp, ENGL Cabloader along with a touch of Valhalla Vintage Reverb.

Before I provide you with my no talking review video, I would also like to give you the tech specs table here below.

I ordered this guitar at the beginning of November 2021 while it was out of stock and waited for a couple of months. Finally, Thomann arranged a split delivery and it arrived very recently.

It comes in a standard guitar box without a case. The box includes a bunch of stickers and leaflets as shown below. Mine didn’t come with an allen key or anything, I looked for it everywhere but couldn’t find it. Maybe, it wasn’t really included at all. But I remember that every Epiphone came with an allen key back in the day. Not a big deal anyways!

This guitar is made in China in 2021 and comes with usual stickers behind the headstock showing it passed quality controls. However, as stated by many users, the factory setup was terrible!

The first thing I did was to do an in-depth check on cosmetics and also any manufacturing error such as cracks. However, I was really surprised that I found almost nothing wrong with this guitar.

Fret ends were super smooth on both sides, the nut was cut nicely with some plastic chips left here and there. I only found a little bit of stain on the sides near the output jack which you can see in my inspection video.

I also came across some glue and tooling marks around fret ends. But I must say they did a perfect job for the money! The binding was almost perfect, completely smooth around the fretboard.

Tuners feel great, but it sometimes feels like there is a little gap when turning the pegs. But it’s a really really tiny bit of annoyance. It has never given me any tuning problems though.

The factory setup was very bad as I have mentioned. The string action was extremely high out of the box. The neck needed a bit of tightening for sure. First, I added some tension to the neck by tightening it, then I lowered the posts at the bridge.

Before I did this, I tuned it up and tried to play for some time. But it sounded terrible. Especially with chords. There was clearly an intonation problem with the guitar right out of the box. Then I checked it and three strings were giving me 30% sharp at the 12th fret. I think I had this extreme result because of the terrible neck relief and string action as I had to press harder just to make that note sound.

After I set it up, the intonation was already better but still needed a lot of correction. I kept playing and tuning it up along the way. Surprisingly, tuning stability was way better than I expected!

It already sounded very good to my ears with my current setup and I couldn’t stop playing for hours already! And this was even before I didn’t even attempt to change the factory strings which are 10 gauge.

In the meantime, I checked all frets and was pretty surprised with fretwork and craftsmanship. They sounded and felt extremely well, just as good as it should be on a proper instrument! I would also like to share my inspection, restringing and instrument care video here.

As you can see from the video, the factory strings don’t have colour coded ball-ends, meaning they are unlikely a standard D’addario set of strings. I believe these were cheap Chinese strings. Right after I restrung my guitar with Pyramid 10-46 strings, adjusted the intonation again and played, I noticed a huge amount of clarity when I played some chords! So I suggest you also do the same and get rid of these stiff factory strings immediately!

If you have ever played an SG, you are already aware of the fact that they are pretty unique and extremely comfortable in a way that no other guitar can really make you feel this way. Your alignment with the instrument is completely different due to its construction.

I also attempted to play my Epiphone SG Custom standing up with a strap and it felt really weird but also comfortable. 🙂

As every SG lover does, I also checked the neck dive and there was just a bit of neck dive, but since the way it fits your body makes it so comfortable to play you will not even realise anything wrong with it! It’s a very light and perfectly balanced instrument in my opinion.

Ebony fingerboard looks a bit cheap as you can imagine. My Schecter Hellraiser Hybrid PT-7 also features an ebony board but they are completely different. Not to mention, Schecter costs twice as much as Epiphone! The ebony fingerboard looked and felt really dry out of the box. So I suggest you use a natural essential oil such as Sandberg Fingerboard Oil and let it soak some.

Overall, I would recommend Epiphone SG Custom Ebony to anyone reading this! I think Epiphone has done a fabulous job and been able to deliver this killer value, full of mojo guitar! Just be prepared to do the initial setup, maintenance and care with a new set of strings.

I hope you have enjoyed this real guitar review article and materials. Thanks for visiting my blog and supporting me so far! I will hopefully see you in the next review here!